Where do I begin with my travelogue this time? In one sentence, New Orleans is a classy city.

Tracing back my knowledge on New Orleans, I have to admit that reading novels on the battle between the Confederates and Yankees besides the slavery of the southern states of America was crucial in my understanding of the lives of southerners.

Yesteryear novels that I read umpteen years ago, for example, “Gone With The Wind” (Margaret Mitchell, 1936) and “Roots” (Alex Haley, 1976) had provided the details of what it was like during the slavery days in the USA then. In “Gone With The Wind”, I also watched the movie where Scarlett O’Hara and Rhett Butler dealing with the slavery issues in the South.

The story underlines the northern Yankees conflicting with the southern Confederates to release the slaves. The blues (Yankees) and the greys (Confederates) had actually took quite a part of my reading life in my teens. Interesting history, as well as, interesting facts of the USA. Then, of course, the black Gambian Kunta Kinte was brought as a slave into USA to work in plantations owned by the whites. Another interesting novel that has impacted me on the slavery of the USA.

Hence, the above details were at the back of my mind when I visited New Orleans in late December, 2018.  Nevertheless, given the priorities, I would want to describe New Orleans based on the activities that I had undertaken: music, the French Quarter, food, steamboat ride and, of course, the swamp tour.

The first on the list is music. Music is in the blood of New Orleans. It is the lifeline of the city. Specifically, jazz and blues are the ones that are linked to the city’s vibrant music life.

Truly glad that live bands are everywhere for one to enjoy. I got connected with the blues live band at BB King’s Club in New Orleans. This was my second BB King club. The first one was when I was living in NYC in 1999. Nice to be back again and listening to the blues. Though I realised that most of the audiences were the baby boomers. I guess the young generation now is not really interested in the blues.

The legend of jazz Ellis Marselis and also Harry Connick Jr are always associated with the New Orleans jazz and also the United States. The contemporary generation will connect more with Harry Connick Jr. He is a multitalented individual – actor, musician and singer. Born and raised in New Orleans, Harry Connick Jr is patriotic about New Orleans. He still maintains a home in the city.

When Hurricane Katrina floods took place in 2005, Harry Connick Jr. was the first celebrity to lend his hand to his hometown. He assisted the populations of New Orleans to get financial assistance for them to move on with their distraught lives after the floods.

I was totally impressed with the establishment of Musicians’ Village in 2007. It was the result of the aftermath of Hurricane Katrina. It was the brainchild of Harry Connick Jr with much comradeship of three former US Presidents – Jim Carter, Clinton and Barack Obama. I visited the village and was totally in awe of the project. I saw rows of beautiful and colourful homes inhabited by the musicians in New Orleans. Great effort!

Realising that music is the lifeline of the city, the above mentioned team knew that Hurricane Katrina would cause upheaval to the lives of the musicians. They might even be uprooted from the city and relocating to other cities. Hence, they established a housing project for the musicians who were victims of the hurricane. The interest rates of the projects will only paid by the musicians after 20 years.

The French Quarter deserves a special mention whenever the name New Orleans crops up. Automatically, that will come to the people’s mind. It is the place where tourists flocked and one can never be disappointed with the place.

The landmark of the place is iron-wrought or iron-cast balcony of the buildings surrounding the area. It is the legacy of the conquerors of yesteryears.

For the sake of absorbing the mood of the southerners, the hubby and I booked a hotel room with a balcony. From the balcony, we could see the activities of the French Quarter. Especially at night, we would watch and listen to music played by the buskers on the streets.

It  was a non-stop and full of fiesta energy at the French Quarter. Live bands playing jazz and blues songs could be heard from the restaurants. Street buskers and performers were everywhere. The buskers were good and many times I stopped to listen to their songs.

Architecture in the location is beautiful. Since we were there during Christmas Day, we managed to get the French Quarter and New Orleans city to ourselves. Like the celebrations in Malaysia, the city was deserted because most of the urbanites exodus for their hometowns or “balik kampung”.

I have deduced at the end of my stay – food is the love of the people of New Orleans. Food in New Orleans is a blend of multi diverse cultures in existence through history. New Orleans cultures are blended with the Spanish, French and Americans. As such, its dishes reflect the various influences as in creole and cajun dishes.

The famous Antoine Restaurant is also located at the French Quarter. It serves creole and cajun dishes. It took me a while to acquire the taste. Basically, the food serves are hot dishes (really hot). The dishes are blended with seafoods such as crawfish, calamari, crabs, lobsters and oysters. So, to the seafood lovers, New Orleans is a haven for seafood.

Cafe du Monde is a must visit with its delicious sugary beignets. Put simply, it is like the Malaysian “kuih keria” which is heavy with sugar coating. It is open 24 hours and there is always a long line waiting outside. Whilst in New Orleans, it was without fail that we had beignets for our breakfast. We were “addicted’ to beignets so much so that we “tapau” (to go away) on the last day of our stay.

Mark Twain in his novels “The Adventures of Huckleberry Finn” and also “The Adventures of Tom Sawyer” describe the challenging journey and environments encountered by them. During my steamboat ride on Natchez, the short cruise reminded me of their adventures. For example, Huckleberry escaped from the abusive father by taking a raft along the Mississippi River. The journey is full of fun for him and also for Tom Sawyer.

The hubby and I had our lunch on the cruise and that had reminded me also of the Titanic movie. The food served was of Creole and also the normal American food. Thank god, we made it to the shore without any encounter of the icebergs.

The Cajun Swamp Tour had me gripping tight to my seat. The thought of the rendezvous with the crocodiles in the swamp had actually given me a sleepless night. 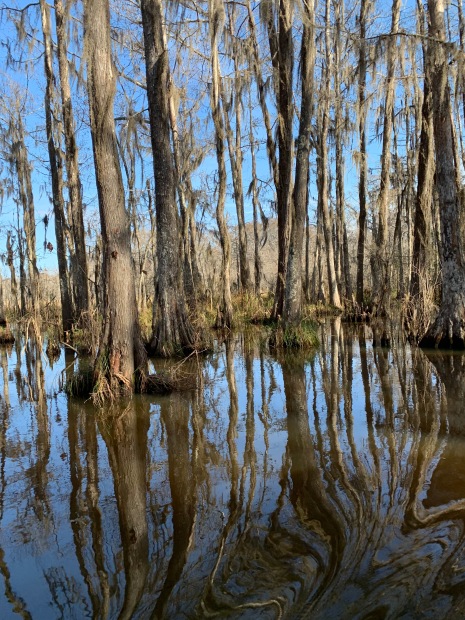 But, in reality, I found it to be a fun boat trip with the other tourists. We were taken to many interesting spots along the way. First, it was a speedy boat ride, and upon reaching some dilapidated homes, we slowed down. The homes were still maintained and habited by the locals. Some made them as their vacation homes. What gave me the creeps was how would they managed when alligators walk into their homes?

Along the way, we saw raccoons and wild boars playing in the water. It was a fun sight with us taking videos and snapping pictures of them. There was a time when a wild boar “confronted” me and looked into my eyes. Frightening indeed!

The highlight of the day was when we finally saw an alligator among the thick growths in the river. One’s eyes can be deceived because it is difficult to trace the alligator whereabouts since it is camouflaged by the thick growths.

It was a totally different experience that I had in New Orleans in comparison to other cities of the USA. The fun adventures that I had made me realised that the slavery in the southern part of USA has transformed the future generation to be successful in their beings. New Orleans has flourished in all sectors, generating wealth and income to the populations. Hence, slavery should be abolished from the vocabulary at global level.

Thank you for reading, folks.